The time has come to finally share the last instalment of the Who/What/Why series.

In case you didn’t know, I have been a busy little bee. Each month I have released a new video on YouTube. The latest video I have posted is probably the hardest one I had to film. If you’d like to check it out, here it is:

So let’s ask the question… why?

Why exactly did I think it would be a good idea to risk a bunch of money, time and my heart pursuing a dream? Well, the answer is simple but also kind of complicated.

All of my life, I’ve been what society would consider a Plus Size woman.

I’ve run the full size gamut. From size 12 all the way up to a 24. I’ve been each one of the sizes that I will be selling. To understand the woman who is Andrea Lucy and why I started this business, I guess we’d better start right at the beginning. 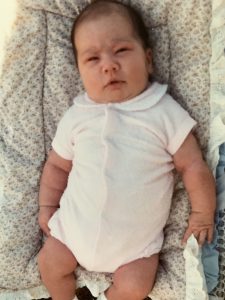 Yep. I was one chubby baby. Poor old Kimiora (my mum) pushed out a ten pound mass of flesh without any pain relief whatsoever. A fact that she liked to remind me of, often.

I feel as if this chubby birth weight has followed me around like a curse. An inescapable thing. To be born this way and being completely powerless to be anything other than what I was.

“You were so huge! Another baby was born the same day as you, a boy. He was such a normal size and there you were, this massive baby that looked like it could eat all the others”

Nobody who uttered these words thought that it could do me harm. I was just a baby after all.

See, this is the thing about these kinds of statements. They’re throwaway little things that people say without much regard to the person they’re describing. Statements alone don’t ruin people. It’s the repetitive nature in which they’re said and enacted.

For a few short years, I grew out of the baby fat I was blessed with and resembled the appearance of a somewhat normal child. It wasn’t until I was about ten years old that I became well and truly ‘fat’. 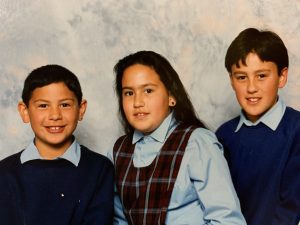 The weight crept up slowly in those early years. Every now and again, when I see pictures of myself young and slim, I’m almost caught off guard. It’s hard to believe I was ever a ‘normal’ size.

Primary School years were probably the kindest to me. Looking back now, I cannot believe I wasn’t teased or ridiculed for my weight. I guess I could consider myself pretty lucky for not being victimised for my size.

High School however… wow. That was an incredibly rude awakening.

In year seven, I was bullied because of the way I looked. Thankfully there were only two or three boys who would mock me and it wasn’t very often but it was often enough. Anyone who has been bullied knows the feeling well.

FAT became a word that would send me into a frenzied panic. Even writing it now makes my heart beat faster.

To have my whole person, my character, defined by a small three letter word.

It devastated me for years and years to come. 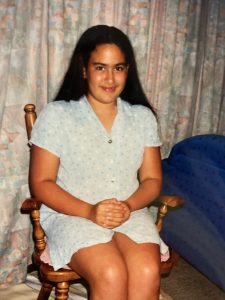 During my later adolescence, I had an epiphany.

I knew exactly why boys didn’t like me. It was because I was FAT. I had to do something about it. If I wanted to be kissed, noticed or respected, I had to lose weight. They saw me as a filthy fat disgusting monster so I had to do one hell of a rebrand to rectify my flailing image.

A ‘No Public eating’ rule had been in effect since year seven and I thought it was time to up the ante. It was time to start starving myself. I would spend hours on the weekend, looking in the mirror and tearing myself apart, piece by piece.

I was an incredibly smart student, achieving excellent grades, yet none of that mattered. All that counted to me was how I looked to others.

It was the beginning of a terrible journey. One that I still struggle with today.

THE GROWN UP FAT WOMAN

At some point in time, I grew up. I don’t remember exactly when that was… it is all a bit of a blur to be honest.

Diets, exercise regimes, protein shakes… there was no crazy fad that I was unwilling to try. Year after year rolled by and slowly but surely, I got bigger. Every now and then, I would manage to lose weight and it would be amazing… but short lived.

It wasn’t until I came across Michelle Bridges 12 Week Body Transformation that things started to change. Over six months, I completely changed my life. Every calorie was meticulously counted prior to consumption, I exercised six days a week and my body shed 30kg. I was on top of the world! I’d finally done it. I had beaten the fat curse.

My new body was amazing, I was strong, I was fit… I was UNSTOPPABLE! Things just seemed to be finally going my way, I was even invited to Sydney to meet Michelle and shoot ads for the new 12WBT marketing campaign. The fat girl was disappearing, and I was jubilant.

You know where this is going, and it still hurts to say it. Everything abruptly stopped and took a sharp turn downward. I was still following the golden rules of 12WBT but no matter what I did, I could not lose one more gram. My body refused.

I can still recall that first week of round four. My calorie content was a meagre 1,200 cals per day (exercising an hour per day, six days a week) and I was hungry, sore and tired. After a week of hard work, I hopped on the scales and I had GAINED an entire kilo. I burst into tears and flew into a rage. I had done everything right. There was no cheating, no sneaky snacks, no slacking off. It made absolutely no sense. It took a LOT for me to keep it together, I was standing on the precipice of a mental breakdown, but I fought it back with everything I had.

The fat girl was laughing at me,
she was coming back because she always wins.

A battle was fought and the fat girl won. Over time, the weight came back and to add insult to injury, I ended up being heavier than I was before I even started 12WBT. It was torture. My weight loss failure was huge and the entire world could now see the sideshow freak that I was. My face was plastered on buses, I was on TV ads, articles in the paper… my prior success was there to mock me every single day.

After so many years of being criticized, I begrudgingly accepted the title that society had thrust upon me. I was well and truly fat. There was no escaping it. My weight became a subject that others saw fit to openly criticise. Family, friends… even strangers. The way I looked to others was offensive and nobody was shy to tell me so.

THE (re)BIRTH OF ANDREA LUCY

After so many years of failed weight loss, I was worn down. To the bone. My self esteem was at a record low. Those were very dark days. Looking back, I don’t quite know how I managed to exist because the way I felt inside was pitch black.

One night I was cooking dinner in the kitchen with my husband and I caught a reflection of myself in the kitchen window. I recall looking at myself and looking over to my sweet little girl (she was only 18 moths old) and I thought to myself:

‘I don’t want Lily to be like this. Like me. I want her to love herself in a way that I never have. How can I be a role model for her if I can’t even accept myself?

There was one tiny little spark of hope that lit up in me. I’d been down the ‘diet and exercise’ path and it didn’t work. Another option had been there all along but I didn’t dare think on it for too long because it was terrifying. Weight loss surgery.

Okay, so the surgery story is LONG and I think it’s better left for it’s own blog post but just let me say that surgery changed my life. In the best way possible. Am I saying that anyone who is overweight should forget diet and exercise and have surgery instead? ABSOLUTELY NOT.

Weight loss surgery is far from easy, it’s scary and hard (and certainly not infallible) but if it is utilised in the correct way, you can completely transform yourself.

So we’ve well and truly established the fact that I have been a plus size woman my entire life. It is something that I have battled with time and time again but these days I wear that badge with pride.

From size 24 all the way down to size 12, can you believe that I still to this day, struggle to find clothes that actually fit? I’m in that weird space between ‘normal’ and ‘plus size’ which is a reality for so many women in Australia. The average size for women is now somewhere between a size 14 to size 16. (a true average size cannot be established thanks to the fact that Australia no longer has standard sizing)

I design clothes for women not only because I love doing it but I UNDERSTAND
the plus size woman because I AM HER.

To see women embracing themselves and wearing clothes that truly make them feel beautiful is my goal. It is the reason why I do what I do. 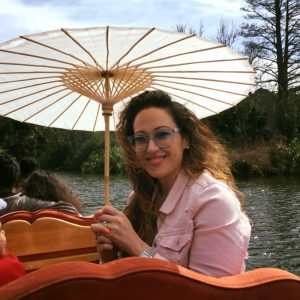